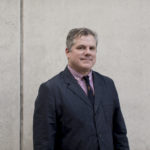 HOUSTON— The Houston Cinema Arts Society has named Patrick Kwiatkowski as Executive Director. Kwiatkowski previously served as an HCAS Advisory Board Member and has been instrumental in the creation and expansion of the CineSpace short film competition, an innovative partnership with NASA, which has grown into a prominent fixture during the annual Houston Cinema Arts Festival. In its second year during HCAF16 in November, CineSpace more than doubled in entries from the previous year, receiving a total of 457 from international destinations around the globe.

Patrick Kwiatkowski is a seasoned veteran in business, having worked at Fortune 500 companies, private enterprises, and founded his own film distribution company, Microcinema International. Kwiatkowski graduated from Michigan State University with a Bachelor of Science in Chemical Engineering and additionally received a Master of Business Administration in International Business from the University of Chicago.

“I am very excited for this opportunity and eager to bring my passion for film to the Houston Cinema Arts Society in a new role,” Kwiatkowski commented. He added, “I am committed to the continued growth and development of the Houston Cinema Arts Festival, which has helped connect the Houston artistic community through film and supports important entities across the City of Houston.”

In a letter to the HCAS Board, Chair Franci Neely commended Kwiatkowski for his leadership and expressed excitement for his forthcoming tenure. She noted, “We are excited to find an Executive Director who not only knows and understands the Houston market, but brings invaluable business and arts-related experience to the table.” Neely added, “We have high expectations that he will be instrumental in taking HCAS to the “next level”.”

Kwiatkowski was previously named as one of the Houston Chronicle’s “Most Fascinating Persons of 2015” for the creation and development of CineSpace. He will take on the role of Executive Director following Interim Executive Director Mary Lampe’s invaluable guidance and support during the 2016 Houston Cinema Arts Festival.

Houston Cinema Arts Society (HCAS) is a non-profit created in 2008 with the support of former Houston Mayor Bill White and the leadership of Franci Neely. It organizes and hosts the annual Houston Cinema Arts Festival, a groundbreaking and innovative festival featuring films and new media by and about artists in the visual, performing and literary arts. The festival celebrates the vitality and diversity of the arts in Houston and enriches the city’s film and arts community. HCAS sponsors include Premier Sponsor Houston First Corporation, Signature Sponsor Anadarko Petroleum Corporation, Featured Sponsor Levantine Films, Media Sponsor Texas Monthly and many others. HCAS is also supported in part by grants from the City of Houston through Houston Arts Alliance, The Brown Foundation, Inc. and Texas Commission on the Arts. The 9th Annual Houston Cinema Arts Festival will take place in November 2017 on dates yet to be announced. For more information, please visit hcaf17.org.

Back to Press Releases